Home Headlines Analysis-As earnings support U.S. stock rebound, worries over future profits grow
Our website publishes news, press releases, opinion and advertorials on various financial organizations, products and services which are commissioned from various Companies, Organizations, PR agencies, Bloggers etc. These commissioned articles are commercial in nature. This is not to be considered as financial advice and should be considered only for information purposes. It does not reflect the views or opinion of our website and is not to be considered an endorsement or a recommendation. We cannot guarantee the accuracy or applicability of any information provided with respect to your individual or personal circumstances. Please seek Professional advice from a qualified professional before making any financial decisions. We link to various third-party websites, affiliate sales networks, and to our advertising partners websites. When you view or click on certain links available on our articles, our partners may compensate us for displaying the content to you or make a purchase or fill a form. This will not incur any additional charges to you. To make things simpler for you to identity or distinguish advertised or sponsored articles or links, you may consider all articles or links hosted on our site as a commercial article placement. We will not be responsible for any loss you may suffer as a result of any omission or inaccuracy on the website.
Headlines

NEW YORK (Reuters) – Stronger-than-expected corporate earnings have helped fuel the rebound for U.S. stocks but some investors are pointing to potential risks ahead for profits that could sap the market’s momentum.

With the vast majority of S&P 500 companies reported, second-quarter earnings are expected to have climbed 9.7% from a year earlier, well above the 5.6% estimated on July 1, according to Refinitiv IBES. The robust profits have supported a rally that has taken the S&P 500 up about 14% this quarter, after a brutal first half.

Some market participants are growing concerned, however, that strong corporate numbers may not last, as companies face an array of challenges, including surging inflation and changing consumer spending habits. These may make it difficult for stocks to hold their recent gains or rise further, they said.

“There is some downside to earnings going forward and it’s revolving around inflation and the ability of companies to pass on those rising costs,” said Paul Nolte, portfolio manager at Kingsview Investment Management.

“I would think the next leg (higher) is going to be a little bit harder” for stocks, he said.

Analysts’ estimates for full-year profit growth have edged lower since the start of July, but still call for solid growth — 8% in both 2022 and 2023, according to Refinitiv.

Strategists at fund management giant BlackRock, however, are among those who believe the market’s views are overly optimistic.

One reason is a shift in consumer spending from goods to services that they believe will weigh on S&P 500 profits.

While goods make up less than a third of gross domestic product, earnings tied to goods are expected to account for 62% of S&P 500 earnings this year, BlackRock said.

“This means a boom in services doesn’t power S&P 500 earnings as much as it does the economy,” they wrote on Monday.

Overstocked inventories at companies such as retailers and semiconductor manufacturers show that such a trend is already underway, they said. 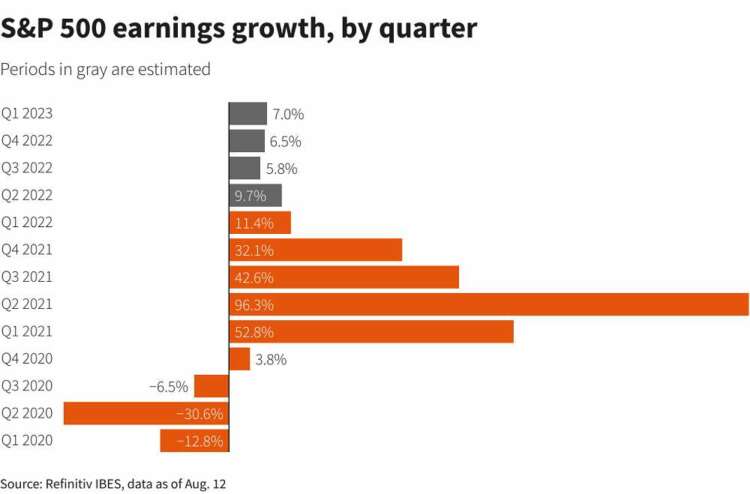 He remains “slightly underweight” equities, despite the recent rebound. Nolte, of Kingsview, has been adding to stock positions in portfolios he manages although he is still below his benchmark allocation.

The firm believes downward earnings revisions are going to accelerate over the next two months, based on historical data going back to 1996.

At the same time, rising valuations could set a higher bar for earnings to come in strong enough to justify the elevated prices. The forward price-to-earnings estimate for the S&P 500 has risen to about 18 times after falling below 16 times in June, according to Refinitiv Datastream. The ratio is still well below the nearly 22 times level reached at the start of the year.

For now, however, companies have continued to show better-than-expected strength in earnings. Walmart on Tuesday nudged up its annual profit forecast, partly reversing a hefty cut less than a month ago, while Home Depot’s quarterly sales surpassed estimates after demand from builders and higher prices helped it cushion a hit from dwindling store visits.

Citi strategists said in an Aug. 12 note that earnings revision trends had improved so far in August versus the previous month.

“The stabilization in revisions is encouraging,” Citi said in the note. “However, 2023 estimates have not worked lower in tandem so there may still be some risk to out year estimates.”

EU leaders to discuss next steps on energy,...

UK cabinet was not informed of plans to...