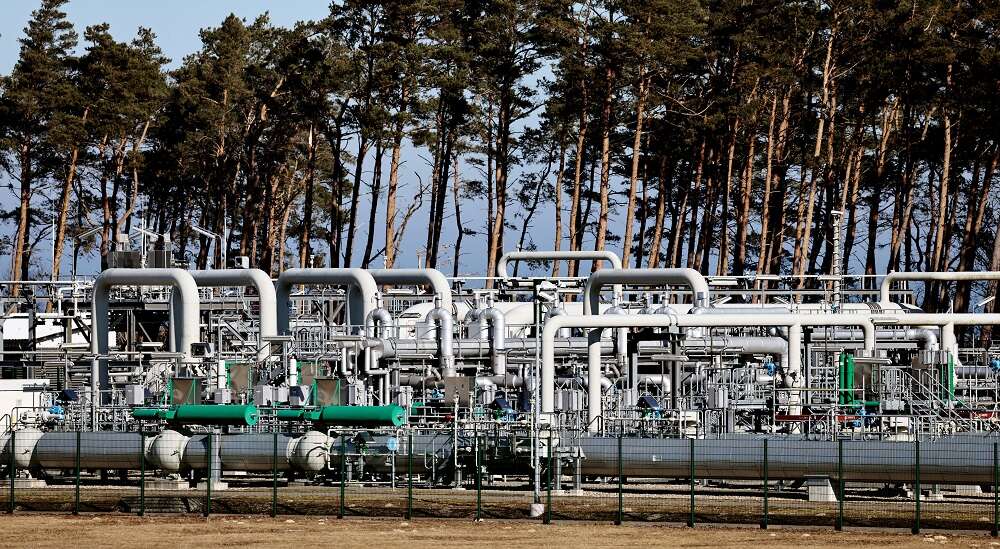 LONDON (Reuters) – Russia’s cut in supplies through its main gas pipeline to Germany will leave countries unable to meet goals to refill storage and Europe’s biggest economy faced with rationing industry to keep its citizens warm during the winter months.

Politicians in Europe have repeatedly said Russia could cut off gas flows this winter, which would thrust Germany into recession and lead to soaring prices for consumers already grappling with inflation at multi-year highs.

So far, the most high-profile casualty of Russia’s reduced gas flows is Germany’s biggest gas importer Uniper. The government was last week forced to bail it out.

On Monday, the squeeze on Germany tightened when Gazprom said it needed to halt the operation of a turbine, meaning flows through Nord Stream 1 from Russia to Germany will drop to just 20% of capacity from Wednesday.

Gazprom had previously cited the delayed return of another turbine being serviced in Canada as the reason to reduce flows to 40% in June before halting them altogether for 10 days of scheduled maintenance this month.

Following the planned repair period, Gazprom resumed pumping on schedule on July 21, but at the reduced level of 40%.

Even before the latest reduction was announced on Monday, Germany’s energy network regulator had said the country would struggle to meet its storage target.

The European Union as a whole plans to refill storage to 80% of capacity by Nov. 1 to provide a buffer for the peak demand winter months. So far, European gas storage levels are at 66% full, data from Gas Infrastructure Europe shows.

Germany has an even higher goal of reaching 95% full by November.

At 20% of capacity, Europe will be able to refill storage to only 75%-80% ahead of winter, Wood Mackenzie consultancy said on Monday.

“As a result, Europe is likely to get through the heating season with only 20% gas in store at the end of March – a very low level,” Kateryna Filippenko, Principal Analyst, Global Gas Supply, at wood mackenzie said.

An extra cold winter would strain the situation further, especially if the weather is severe in Asia, as well as Europe, which would limit global availability of liquefied natural gas (LNG) to supplement pipeline supplies.

Gas flows via other pipeline routes, such as Ukraine, have also fallen since Russia invaded its neighbour in February, in what Moscow calls a “special military operation”, and the risk of a total cut-off through Nord Stream 1 looms large.

While Germany is particularly dependent on Russian gas, Austria and central and eastern Europe are also big users of Russian supplies.

Before the cuts linked to the turbine servicing in Canada, Russia has cut gas flows to Bulgaria, Denmark, Finland, Dutch firm Gasterra and Shell for its German contracts, after they all rejected a Kremlin demand issued in March to switch to payments in roubles.

Analysts and politicians say it would be very easy for Russia to find further reasons for further cuts.

“The key question is whether Russia wants to maximise pressure now and derail Europe’s plans to refill its gas inventories by the fall, or if Moscow wants to keep its powder dry until later in the year,” said Centre for Strategic and International Studies fellows Ben Cahill and Isabelle Huber.

The European Union has been preparing for the prospect of continued lower supplies or a complete stoppage by seeking out alternative suppliers, encouraging energy saving and increasing coal generation.

Last week, the European Commission, the EU executive, proposed a target for all member states to cut gas use by 15% from Aug. 1 to allow storage to fill more quickly.

But the plan faces resistance from member states, with some flatly against binding cuts and others unwilling to let Brussels control their energy use.

“The entire European energy system is going through a crisis, and even with the restart of Nord Stream 1, the region is in a tight position with continued risk to energy security,” Karolina Siemieniuk, analyst at consultancy Rystad Energy, said.

“European countries will need to work together fast if they are to survive the winter relatively unscathed and even if they do, the spectre of the next winter in 2023/24 is likely to keep prices elevated for months on end.”