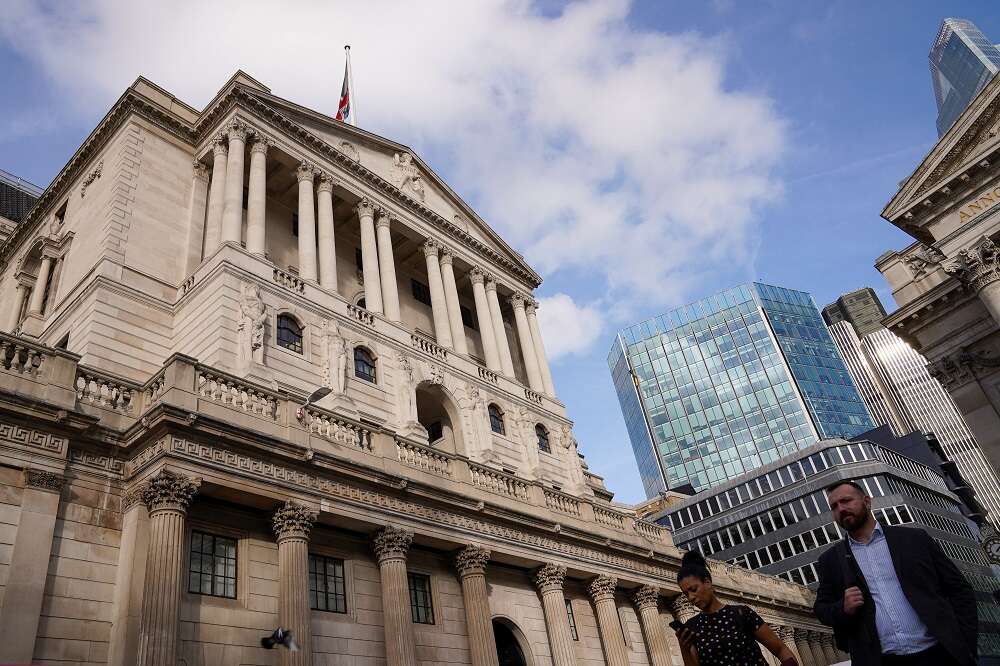 LONDON (Reuters) – The Bank of England looks set to raise borrowing costs by the most since 1989 next week even as it prepares for a recession that could be deepened by spending cuts under new Prime Minister Rishi Sunak.

As well as raising interest rates on Thursday for an eighth meeting in a row to tame inflation above 10% – this time by three-quarters of a percentage point according to most analysts – the BoE is also due to become the world’s first big central bank to start selling bonds from its stimulus stockpile on Tuesday.

After a period of turmoil in Britain, caused by the economic plans of former prime minister Liz Truss which sparked a bond market rout, the BoE’s double-barrelled monetary tightening might look at odds with its current forecasts that the economy will be shrinking until 2024.

But with inflation still set to be way above the BoE’s 2% target in 2023 and some of Truss’s costly help for households and businesses still in place, the only way is up for borrowing costs.

“As things stand today, my best guess is that inflationary pressures will require a stronger response than we perhaps thought in August,” BoE Governor Andrew Bailey said on Oct. 15.

On Aug. 4, the BoE raised rates by half a percentage point, its biggest increase in 27 years, and did so again in September.

Some of Bailey’s inflation worries eased two days after he spoke when new finance minister Jeremy Hunt reversed almost all the tax cuts planned by Truss and shortened her income-boosting energy cap programme to six months rather than two years.

But the ongoing spread of inflation through Britain’s economy this year means the BoE remains on high alert.

“Many economic indicators have weakened since the committee last met in September, but the jobs market has remained tight and pay growth strong,” Goodwin said.

Investors are putting a roughly 90% chance on a 75 basis-point hike in Bank Rate to 3% on Nov. 3. That would be less than the full percentage-point expected before Truss’s plans were scrapped but would still be the biggest hike by BoE in 33 years.

A Reuters poll of economists published on Tuesday showed most expected a 75 basis-point increase although a sizeable minority saw a bigger increase to 3.25%. On Friday, analysts at ING forecast a smaller, 50-basis point rise.

The picture further ahead is clouded by the delay to Sunak and Hunt’s plans for repairing the public finances.

They have warned of tough decisions. British media reported they were considering 50 billion pounds of tax increases and spending cuts, more than estimates of the hole in the budget.

Hunt had been due to announce the plan on Oct. 31 but it was delayed until Nov. 17 after Sunak became prime minister.

Interest rate futures show investors are much less worried about inflation than they were just a few weeks ago with Bank Rate expected to peak at about 4.75% in 2023, down from more than 6% before the sudden end of “Trussonomics.”

Deputy Governor Ben Broadbent added an extra dose of cold water on Oct. 20, saying the borrowing costs priced by investors in the preceding days would hammer the economy.

The BoE’s plan to start selling some of the bonds it bought since 2009 to support the economy will also ease some of the pressure to raise rates.

Deutsche Bank said the planned 40 billion pounds’ worth of sales over the next year were equivalent to about 25 basis points of rate hikes.

But Goodwin at Oxford Economics warned of potential dangers in the plan. “There is no pressing reason to kick off quantitative tightening and bond sales run the risk of triggering renewed turmoil in the gilts market,” he said.

Where is the insurance industry heading? Fadata predicts five developments in 2023

Central banks hike rates again, but a pause is coming