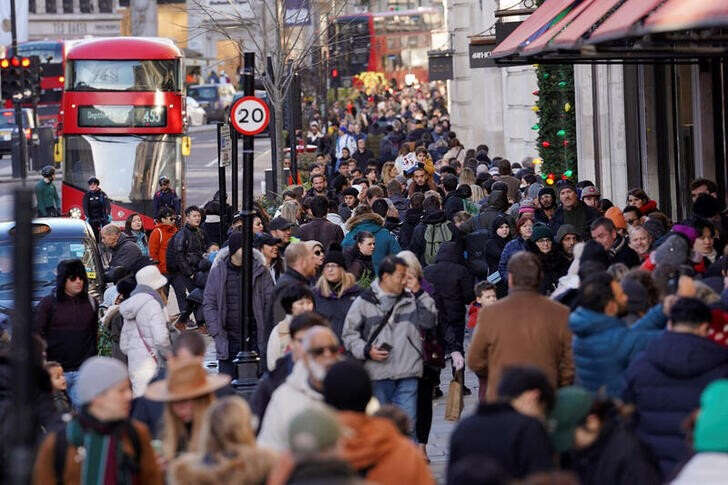 By James Davey and Sarah Young

LONDON (Reuters) -Britons spent more than expected over Christmas, Next, one of the country’s biggest clothing retailers, said on Thursday in a sign that resilient shoppers helped the sector dodge a cost-of-living crisis that threatened to hit festive sales.

But a slowdown looms this year, said Next warning that British shoppers were set to cut back on spending.

Britain is currently bottom among the Group of Seven major advanced nations in terms of quarterly growth.

In November, the Bank of England forecast Britain was heading into a long recession, with inflation not returning to its 2% target until early 2024, and the government’s budget watchdog predicted the biggest squeeze on living standards since records began in the 1950s.

In the run-up to Christmas, however, Britons opened their wallets. Next’s sales grew by almost 5% compared to last year, beating expectations.

Next’s performance lifted British retail stocks on hopes that Christmas, which is key to retail profit, will be better than expected across the board.

Leading the charge, Next was up 8%, while Primark-owner AB Foods rose 3%, clothes and grocery chain Marks & Spencer traded up 5%. JD Sports, online fashion retailer ASOS and electrical retailer Currys were up about 3%.

With 500 stores and a big online presence, Next is viewed as a gauge of how consumers in Britain are faring. Chief Executive Simon Wolfson said coats and winter clothes sales benefited from cold weather in December.

“We thought December would be particularly difficult and it’s turned out to be much better than expected,” he told Reuters.

Shops at the value end of the scale did even better than Next.

B&M, which sells products ranging from toys to frozen goods and garden furniture, posted a 6% rise in comparable Christmas sales, and Greggs whose snacks and coffees are cheaper than many rival cafes, said its sales were up 18% in the period.

On Tuesday the British arm of German discount supermarket group Aldi said its December sales rose 26% compared to the previous year, another sign of the hunt for savings from cash-strapped shoppers.

Retail sales also benefited from busier town centres, shopping malls and retail parks, both before and after Christmas as Britons returned to stores after the previous two years when festive shopping habits were curtailed by the COVID-19 pandemic.

Shopper numbers across Britain in December rose 5.8% from November and were up 9.9% compared to 2021, research company Springboard said.

However, shoppers’ resilience will not last into this year, according to Next.

Mid-market retailers, such as Next, are likely to be squeezed particularly going forward, as value end and luxury goods seem to be holding up.

Next expects sales to fall by 2% in 2023, as Britons start to react to rising mortgage costs, with more people coming to the end of fixed-price deals, and as higher energy prices increase pressure on household budgets.

After a year marked by the return of double-digit inflation – currently standing at 10.7% – the group said it expected its cost inflation to peak in the Spring/Summer season and fall to no more than 6% in the second half.

A fuller picture of Christmas sales will emerge next week when Tesco, Sainsbury’s, M&S, JD Sports Fashion and ASOS all update on trading.