Home Headlines Euro zone slide towards recession pins euro to 20-year low
Our website publishes news, press releases, opinion and advertorials on various financial organizations, products and services which are commissioned from various Companies, Organizations, PR agencies, Bloggers etc. These commissioned articles are commercial in nature. This is not to be considered as financial advice and should be considered only for information purposes. It does not reflect the views or opinion of our website and is not to be considered an endorsement or a recommendation. We cannot guarantee the accuracy or applicability of any information provided with respect to your individual or personal circumstances. Please seek Professional advice from a qualified professional before making any financial decisions. We link to various third-party websites, affiliate sales networks, and to our advertising partners websites. When you view or click on certain links available on our articles, our partners may compensate us for displaying the content to you or make a purchase or fill a form. This will not incur any additional charges to you. To make things simpler for you to identity or distinguish advertised or sponsored articles or links, you may consider all articles or links hosted on our site as a commercial article placement. We will not be responsible for any loss you may suffer as a result of any omission or inaccuracy on the website.
Headlines

LONDON (Reuters) – Contraction in the euro zone economy for a second straight month pinned the single currency to a 20-year low against the dollar on Tuesday, with surging gas prices adding to misery dragging Europe towards recession.

While the S&P flash composite Purchasing Managers’ Index (PMI) of business activity in Europe was not as bad as feared, analysts said more grim news for the economy is likely given how gas prices have surged to record highs ahead of winter.

The MSCI global stock index was down 0.3%.

The STOXX index of European company shares shed 0.4%, having fallen for nearly a week. It is now about 11% off its record high of January 4 as war in Ukraine pushed up inflation and triggered rises in central bank interest rates to cast a pall over growth.

Benchmark gas prices in the European Union surged 13% overnight to a record peak, having doubled in just a month to be 14 times higher than the average of the past decade. [NG/EU]

Europe was braced for fresh disruption in energy supplies from Russia.

“I can’t see the Ukraine war coming to an end anytime soon, that would be the catalyst for a market rally. That is going to keep pressure on energy prices and as for the euro, the only way is down,” said Michael Hewson, chief markets at CMC Markets.

Stocks had begun to recover on bets the U.S. Federal Reserve would ‘pivot’ next year away from its rate rising path.

But despite signs of U.S. inflation peaking, markets now expect the Fed will remain hawkish when its chair Jerome Powell addresses the annual Jackson Hole meeting of global central bankers on Friday.

At last year’s meeting, central bankers wrong-footed investors by predicting that inflation would be a temporary blip, but price rises have been higher, longer-lasting and more broad-based, said Monica Defend, head of Amundi Institute.

Markets are betting on the Fed raising rates by 75 basis points next month, when the European Central Bank and Bank of England are also expected to increase their benchmark rates.

Defend said that while company earnings have showed some resilience, margins would come under pressure later this year.

The euro, trading at $0.9920 versus the dollar, is expected to fall further to $0.9600 by December given Europe’s poorer outlook, Defend said.

“The U.S. and the euro area are on two different tracks,” she said.

Sterling moved off 2-1/2 year lows against the dollar after the PMI for Britain showed business activity slowing in line with expectations. 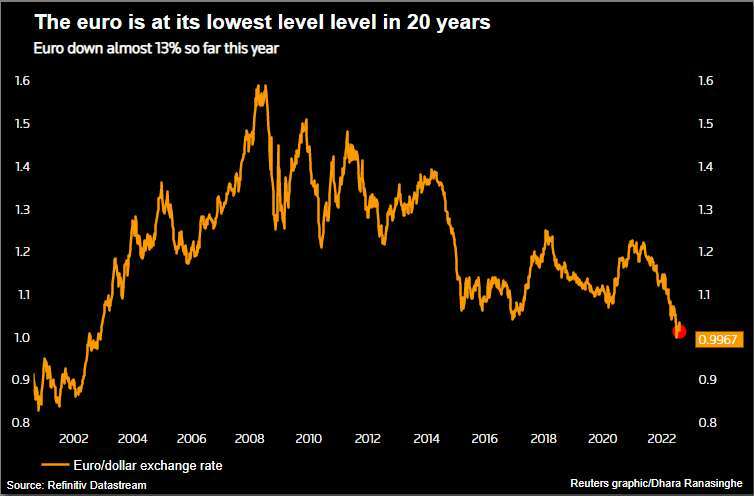 S&P 500 futures and Nasdaq futures were steady after Monday’s steep selloff on Wall Street. PMIs for the United States are due shortly after the stock market opens.

Asian shares were down for a seventh straight session on Tuesday after a renewed spike in European energy prices stoked fears of recession and pushed bond yields higher, while tipping the euro to 20-year lows.

Unease over China’s economy continued to percolate as a cut in lending rates and talk of a fresh round of official loans to property developers underlined stresses in the sector.

“Growth in the services sector seems unlikely to accelerate by much so long as China’s zero-COVID policies remain in place; the pandemic-linked export boom is coming to an end; and power shortages due to droughts in parts of the country look set to hobble industry in the near term,” said Oliver Allen, a market economist at Capital Economics.

Chinese blue chips were off 0.5%, while the yuan fell to an almost two-year low. [CNY/]

The Nikkei lost 1.2% after a PMI survey showed factory activity in Japan slowed to a 19-month low in August.

Ten-year yields were last trading at 3.01%, up almost 50 basis points from the lows of early August. [US/]

The ascent of the dollar and yields has been a drag for gold, which was hovering at $1,736 an ounce after hitting a three-week low overnight. [GOL/]