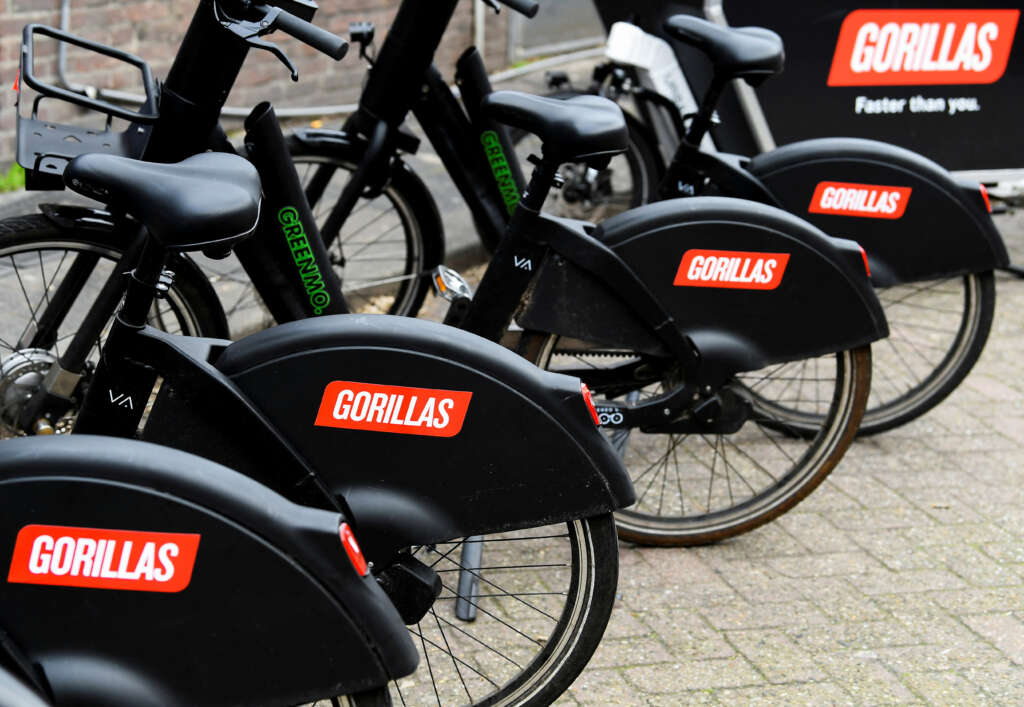 AMSTERDAM (Reuters) -Grocery-in-minutes company Getir’s $1.2 billion deal to buy rival Gorillas is an important step toward consolidation in Europe’s food delivery market, where companies are struggling amid a post-COVID slowdown.

After rapid expansion, these businesses were hit in March with a fall in lockdown-driven demand for deliveries and by rising interest rates, while investors soured on loss-making tech companies.

The food delivery groups began quickly combining, cutting costs, and exiting markets where they were weak, in a quest to become profitable.

Companies and industry observers say the painful retrenchment is set to continue — but survivors are starting to see the first green shoots.

But she said Europe’s cost-of-living squeeze remains a major negative.

“We haven’t seen how these companies will get through a recession yet.”

Istanbul-based Getir and Berlin-based Gorillas were among the many venture capital-backed quick commerce companies racing during the pandemic to set up “dark stores” — delivery hubs in city centres used to shuttle groceries swiftly to customers.

The dark store model is fundamentally different to that of more established groups like Just Eat Takeaway and Uber Eats, which take orders for restaurants and deliver meals, though they are often seen as competitors.

Getir was valued at around $8.8 billion in Friday’s deal, about seven times more than Gorillas due to its strong position in Turkey where it is based, analysts said.

Gorillas and Getir did not respond to requests for comment.

Other consolidators are Berlin-based Flink and Philadelphia-based GoPuff, which operates in the United States and Europe.

“In Germany, we see competition directly from Gorillas and Getir. All the others have disappeared,” said Flink spokesman Boris Radke.

Radke said Flink is thriving due to close partnerships with supermarkets REWE in Germany and Carrefour in France, both of which are shareholders in the company.

Analysts reckon that a dark store hub turns profitable at somewhere between 500-1,000 orders per day.

“We closed down a few hubs that were not profitable and we definitely put aside any kind of bigger expansion plans,” amid the downturn, Radke said.

However the number of Flink hubs that are profitable is growing he said, and sales are rising “consistently month after month.”

More than a dozen smaller European quick commerce companies failed or were acquired since mid-2021.

Venture capital firms invested $125 million in the sector in two deals in 2022, down from $1.3 billion in thirteen deals in 2021, based on PitchBook data.

With less competition and less new capital entering the market, remaining firms in both grocery and food delivery have cut spending on vouchers and promotions.

While most meals companies have experimented with quick commerce, both types of firms are also now cooperating more frequently, a sign of things to come.

That will give Just Eat Takeaway additional high-margin orders, while Getir gets more deliveries and sales from its dark stores.

“I expect we will see more activity either in the form of M&A or deep commercial partnerships,” said Larry Illg, head of food businesses at technology investor Prosus, which owns a stake in Delivery Hero.

While profits may still be distant for the privately-held quick commerce companies, Europe’s listed meal delivery companies have all set formal targets for earnings before interest, taxes, depreciation and amortisation (EBITDA).

Just Eat has said it is EBITDA-profitable already. Delivery Hero says it will get there in 2023 and Britain’s Deliveroo by the first half of 2024 at the latest.

Shares in the European delivery companies are down around 60% from a year ago, but have traded sideways since June.

Uber and DoorDash, both already EBITDA positive on the strength of their U.S. operations, say their European subsidiaries are growing.

He said fast grocery options are “absolutely available on the app, but we don’t believe it makes sense to own the entire supply chain” as Getir does.

Sajal Srivastava, co-founder at TriplePoint Capital, which has provided venture debt funding for Flink, says negativity about quick commerce has been overdone.

So to “all the naysayers saying ‘quick commerce is over – No. It’s going to be around and the data shows it.”