Home Headlines First winter cold snap tests French power grid
Our website publishes news, press releases, opinion and advertorials on various financial organizations, products and services which are commissioned from various Companies, Organizations, PR agencies, Bloggers etc. These commissioned articles are commercial in nature. This is not to be considered as financial advice and should be considered only for information purposes. It does not reflect the views or opinion of our website and is not to be considered an endorsement or a recommendation. We cannot guarantee the accuracy or applicability of any information provided with respect to your individual or personal circumstances. Please seek Professional advice from a qualified professional before making any financial decisions. We link to various third-party websites, affiliate sales networks, and to our advertising partners websites. When you view or click on certain links available on our articles, our partners may compensate us for displaying the content to you or make a purchase or fill a form. This will not incur any additional charges to you. To make things simpler for you to identity or distinguish advertised or sponsored articles or links, you may consider all articles or links hosted on our site as a commercial article placement. We will not be responsible for any loss you may suffer as a result of any omission or inaccuracy on the website.
Headlines

PARIS (Reuters) – Temperatures hovering near zero in coming days will test the resilience of France’s power network, even as President Emmanuel Macron urged the French not to panic amid warnings of possible blackouts.

French utility EDF saw its electricity output drop to a 30-year low earlier in 2022 due to a record number of nuclear reactor outages arising from corrosion problems, and it is racing against time to ensure its fleet can run at full capacity for the depths of winter.

French utility EDF saw its electricity output drop to a 30-year low earlier in 2022 due to a record number of nuclear reactor outages, and it is racing against time to ensure its fleet can run at full capacity for the depths of winter.

France is more vulnerable to Europe’s energy crisis, unleashed by the fallout from the war in Ukraine, than some other European nations due to low nuclear availability and demand there being particularly temperature-sensitive, said Jean-Paul Harreman, director of EnAppSys energy consultancy.

After an unusually mild November helped reduce electricity use in France, temperatures dropped on Monday and are set to linger near zero later this week and next.

On Monday, lower-than-forecast nuclear availability was offset by higher imports from all of France’s neighbours and high production from gas-fired power plants.

RTE’s EcoWatt alert app – which the government is urging people to download to be warned of peaks in demand or risk of cuts – remained green.

“It is not cold enough for that yet, but we do see France hitting its import limitations,” Harreman said.

Refinitiv analyst Nathalie Gerl said that with forecasts showing colder temperatures next week, “the coming Monday Dec. 12th will be even tighter.

“Consumption is set to peak at 80 GW (versus 73 GW on Dec. 5), while wind power is expected to be below normal. Should the nuclear availability remain at 37-38 GW the supply gap risk will be much more acute than today,” she said. 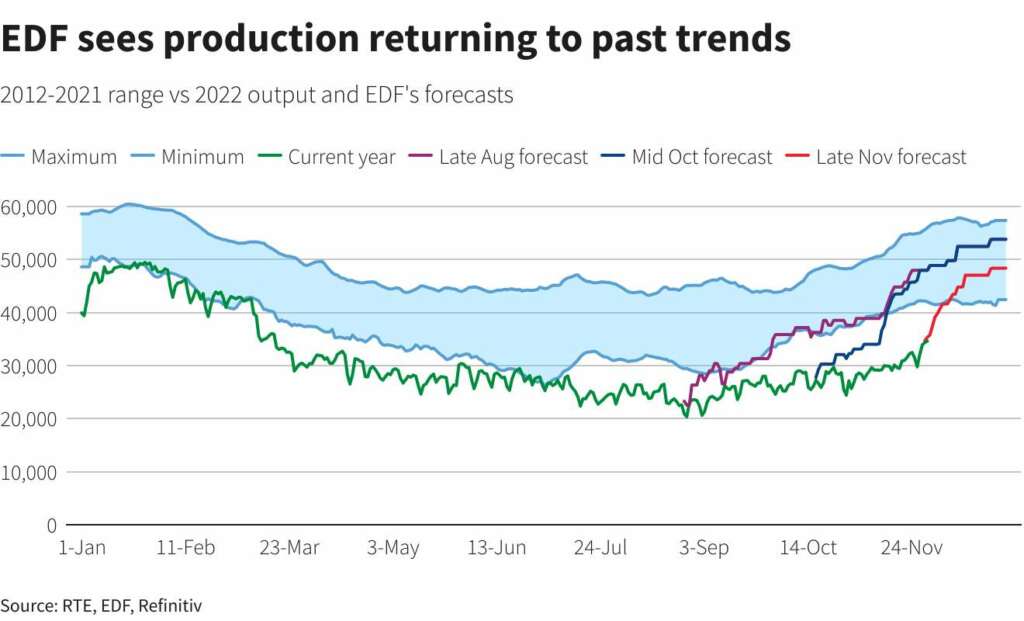 Government ministers have warned of possible power outages in case of a gap between supply and demand, which they said would last no longer than two hours and be flagged in advance.

Warnings abound, with telecoms operator Orange saying emergency phone calls may not be possible in parts of France if there are prolonged power cuts, and France’s Banking Federation (FBF) acknowledging cash machines would be affected.

“First of all, let us be clear: no panic!” Macron told TF1 television at the weekend.

He added: “It is legitimate for the government to prepare for the extreme cases which would mean cutting off electricity for a few hours per day if we did not have enough power.”

Meanwhile, further delays on nuclear reactors were announced on Monday.

A pair of the 900 megawatt (MW) Dampierre reactors in central France had their outages extended, with the second reactor in the park being pushed back 10 days to Dec. 19 and the third reactor being extended six days to Dec. 12.

FDA advisers back the same COVID vaccine for...