Home Headlines Inflation fears grip markets as bonds, stocks plunge
Our website publishes news, press releases, opinion and advertorials on various financial organizations, products and services which are commissioned from various Companies, Organizations, PR agencies, Bloggers etc. These commissioned articles are commercial in nature. This is not to be considered as financial advice and should be considered only for information purposes. It does not reflect the views or opinion of our website and is not to be considered an endorsement or a recommendation. We cannot guarantee the accuracy or applicability of any information provided with respect to your individual or personal circumstances. Please seek Professional advice from a qualified professional before making any financial decisions. We link to various third-party websites, affiliate sales networks, and to our advertising partners websites. When you view or click on certain links available on our articles, our partners may compensate us for displaying the content to you or make a purchase or fill a form. This will not incur any additional charges to you. To make things simpler for you to identity or distinguish advertised or sponsored articles or links, you may consider all articles or links hosted on our site as a commercial article placement. We will not be responsible for any loss you may suffer as a result of any omission or inaccuracy on the website.
Headlines

LONDON (Reuters) – Global stocks and government bonds extended a bruising sell-off on Monday and the dollar resumed its march towards two-decade highs as red-hot U.S. inflation fuelled worries about even more aggressive policy tightening in a big week for central banks.

A market gauge measuring the gap between U.S. two-year Treasury yields and 10-year borrowing costs inverted on Monday for the first time since April, a phenomenon that often heralds economic recession.

The latest sell-off in global bond markets came after a substantially higher-than-expected U.S. CPI print on Friday hurt investors, who sold both bonds and equities, and quashed expectations that policymakers were starting to gain the upper hand in capping soaring prices.

The inflation reading unnerved investors and depressed world stocks to the brink of a fresh 2022 low, as markets ratcheted up expectations on where U.S. interest rates would peak next year to around 4% from around 3% less than two weeks ago.

Where benchmark policy rates peak in the United States and other major economies is the trillion-dollar question for investors, as that determines equity valuations and how far central banks are from attaining those objectives.

“Multiple negatives have been thrown at the market in the last three trading days, but topping the list are worries over a need for a more aggressive policy response from central banks feeding into already fragile global growth worries,” said Stephen Innes, a managing partner at SPI Asset Management.

European shares fell to their lowest in more than three months on Monday, and the euro STOXX volatility index – an equivalent in Europe of the U.S. VIX index, also known as Wall Street’s fear gauge – surged to a one-month high.

Benchmarks in many countries including the Netherlands have suffered declines of more than 20% from a recent closing peak.

An index of world stocks tumbled 3.5%.

“This is happening in spite of the actions that have so far been taken by central banks…, stoking fears that they will have to go harder and faster if inflation is to be tamed, the cost of which is being increasingly seen as lower growth and potentially recession,” Equiti Capital chief macro strategist Stuart Cole said.

With inflationary signs showing no signs of abating and new mass COVID-19 testing in China sparking concerns about more crippling lockdowns and squeezed global supply chains, investors cut exposure to risky assets across the board.

European bonds were also caught up in the broadening debt market selloff after a hawkish European Central Bank meeting last week, with two-year German bond yields rising above 1% for the first time in more than a decade. [GVD/EUR]

Money markets are pricing in a total of almost 250 bps in rate hikes by the U.S. Federal Reserve to the end of the year with only five meetings remaining. Some investment banks are pencilling in a 75-basis-point hike at a policy meeting this week.

Expectations of even more aggressive rate hikes from global central banks have spurred investors to ramp up their bearish bets on global growth. This is a big week for central banks with the Fed, Bank of England and Swiss National Bank holding policy meetings.

Multiple indicators of growth in markets slumped on Monday from technology shares in Hong Kong to the Australian dollar, as investors fled to the perceived safe haven of the U.S. dollar.

The dollar hovered near a peak of 135.22 yen, its highest since October 1998, buoyed by a rise in Treasury yields that continued into Tokyo trading, while the British pound was down more than 1% after data showed the UK economy unexpectedly shrank in April. [GBP/]

The broader dollar index, which measures the value of the greenback against its rivals, jumped 0.57% to within striking distance of a 2003 high hit last month.

The focus in Asia was on the risk of fresh coronavirus lockdowns, with Beijing’s most populous district of Chaoyang announcing three rounds of mass testing to quell a “ferocious” outbreak that emerged at a bar.

“Anyone trying to pick the bottom in China’s growth and equity markets on the basis that China was ‘one and done’ on lockdowns is naive,” said Jeffrey Halley, senior market analyst at OANDA.

China’s growth shares sagged, with tech giants listed in Hong Kong slumping 4.45%. Index heavyweights Alibaba, Tencent and Meituan were each down between 4% and 6%. 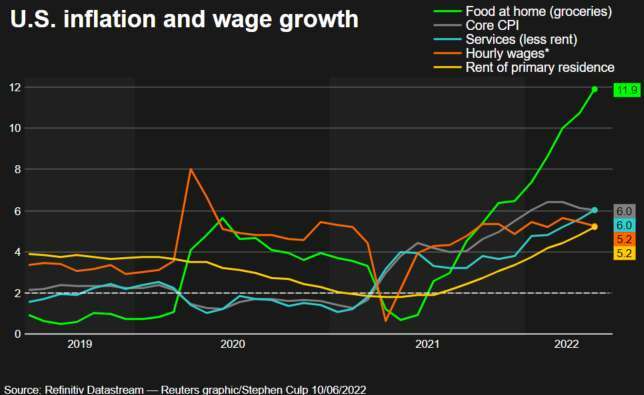