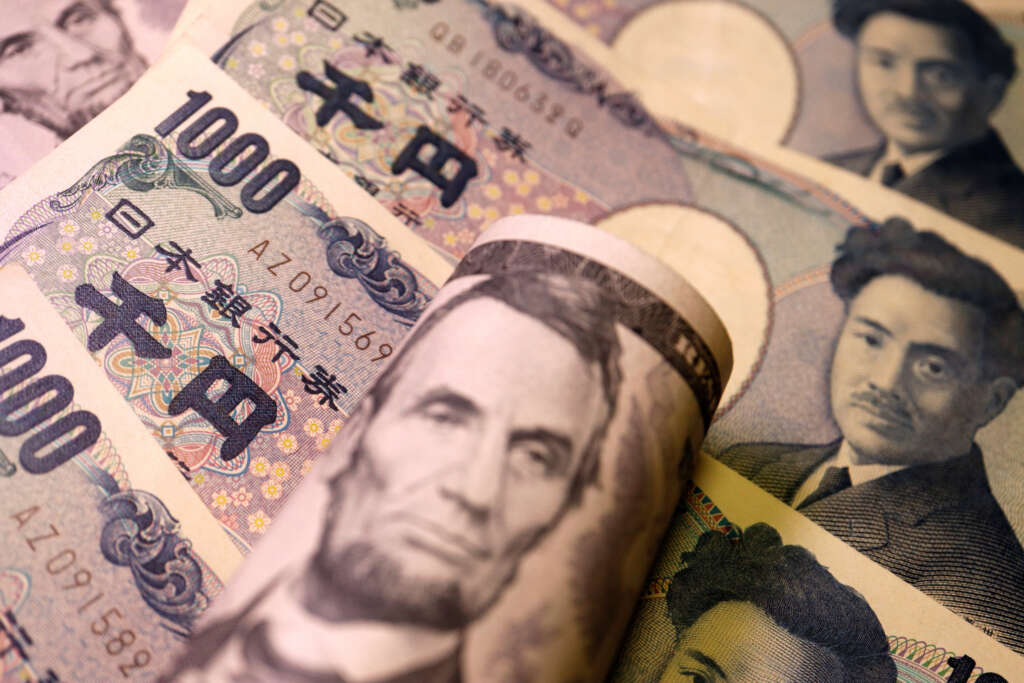 NEW YORK (Reuters) -The yen fell in a choppy session on Wednesday, ceding some of the ground gained the previous day when a surprise policy tweak by the Bank of Japan lifted the Japanese currency by 4% against the dollar.

The BOJ decided to change its “yield curve control” policy on Tuesday even as it kept broad policy settings unchanged. It is letting 10-year yields move 50 basis points either side of its 0% target, wider than the previous 25-basis-point band.

On Wednesday, the dollar was 0.4% higher against the yen, having plunged 3.8% in the previous session, its largest one-day drop against the Japanese currency in 24 years.

“I think yesterday’s move was warranted but perhaps a bit outsized, so a slight pullback would be natural today,” said John Doyle, vice president of dealing and trading at Monex USA.

Given the size of Tuesday’s move in dollar-yen, traders should expect the pair to be volatile, Doyle said.

Strategists attributed some of the move to poor liquidity ahead of the holidays.

“The yen move was overdone. A lot of people had their fingers burned and with thin liquidity in the holiday season, not a lot of people want to get involved right away,” said Marc Chandler, chief market strategist at Bannockburn Forex in New York.

“I think the dollar has topped out. I don’t think we’re going to 150 (yen) anytime soon,” Chandler said.

The story of 2022 has been the strength of the dollar, which has surged as the U.S. Federal Reserve hiked interest rates at a rapid clip, and as rising geopolitical tensions left investors seeking shelter in less risky currencies.

The BOJ, long preoccupied with reviving price growth to avert a risk of deflation, has been an outlier among central banks this year. It has kept interest rates negative while other central banks have hiked hard to tame inflation and bolster domestic currencies against the U.S. dollar.

Sterling slipped against the dollar and euro on Wednesday as British public borrowing hit a November record, underscoring the challenges for the UK economy. The British pound was down 0.8% at $1.2091.

The Canadian dollar was little changed on the day at around 1.3595 to the greenback, as investors remained undecided as to whether the Bank of Canada would tighten further next month following mixed inflation data for November.

Meanwhile, bitcoin was 0.6% lower at $16,791 as cryptocurrencies struggle to recover from the sharp losses dealt by the high-profile collapse of crypto exchange FTX.