Home Finance Global AML fine amounts fall as regulators turn their attention to crypto
Our website publishes news, press releases, opinion and advertorials on various financial organizations, products and services which are commissioned from various Companies, Organizations, PR agencies, Bloggers etc. These commissioned articles are commercial in nature. This is not to be considered as financial advice and should be considered only for information purposes. It does not reflect the views or opinion of our website and is not to be considered an endorsement or a recommendation. We cannot guarantee the accuracy or applicability of any information provided with respect to your individual or personal circumstances. Please seek Professional advice from a qualified professional before making any financial decisions. We link to various third-party websites, affiliate sales networks, and to our advertising partners websites. When you view or click on certain links available on our articles, our partners may compensate us for displaying the content to you or make a purchase or fill a form. This will not incur any additional charges to you. To make things simpler for you to identity or distinguish advertised or sponsored articles or links, you may consider all articles or links hosted on our site as a commercial article placement. We will not be responsible for any loss you may suffer as a result of any omission or inaccuracy on the website.
Finance

Blockbuster fine in the Netherlands underlines that the U.S. no longer dominates AML penalty activity

The UK regulator opens fewer AML cases in 2021, as enforcement focus shifts away from major banks

LONDON – MARCH 22nd, 2022: Kroll, the leading provider of data, technology and insights related to risk, governance and growth, has found that whilst anti-money laundering (AML) continues to dominate global financial crime regulation, enforcement activity is slowing as attention turns from banks to other financial institutions.

The findings come from Kroll’s annual Global Enforcement Review 2022, which shows that, globally, the value of fines issued to financial services firms for AML failings reached a new recent low of $1.6 billion (bn) in 2021, compared to $2.2 bn in 2020 and representing just half of the peak figure of $3.3 bn achieved in 2018.

Claire Simm, Managing Director, Financial Services Compliance and Regulation at Kroll, said: “In the Western world, it is almost impossible to find a major, global bank that has not been sanctioned for AML or other financial crime failings in recent years.”

“This is reflective of the predominant focus global regulators have placed on ensuring AML measures are functioning robustly at the world’s major financial services institutions.”

“Now that AML-related concerns and failings have resulted in many large banks being sanctioned, regulators are beginning to pay increased attention to other areas of financial services.” 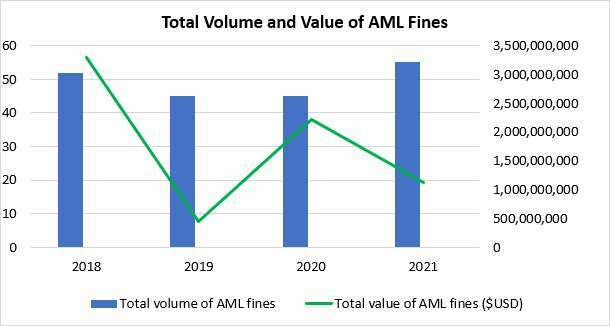 Kroll’s report also highlights the four key AML failings from 2016-2021 which regulators across the world have consistently identified through the fines they imposed:

The report further shows that the overwhelming historical dominance of the U.S. in terms of the value of AML-related fines now seems to be a thing of the past, with U.S. fines accounting for just 36% of the global total in 2021.

In a further shift of trends, 2021 also saw a new jurisdiction join the “top table” of countries imposing major fines for AML failings—the Netherlands. Indeed, in 2021, the Dutch regulator fined one of its major banks $578 mn, which alone represented 35% of the total value of AML fines globally.

Kroll’s report shows that the FCA had 54 open active financial crime investigations as of 31 March 2021. Of these, eight were originally opened in 2016 and 14 in 2017, according to information provided in response to a Freedom of Information Act request submitted by Kroll.

However, new AML enforcement investigations in the UK have, slowed to a trickle—with only three opened by the FCA in 2021.

Simm continued: “Having opened 13 AML cases in 2016 and 24 cases in 2017, the number of new AML investigations slowed considerably in recent years, with only three cases opened in 2021. The FCA will be looking either to achieve a public outcome from its existing cases or to close them in order to be able to deploy resource on new investigations, potentially in sectors other than banking.”

“Given the huge growth of lightly-regulated cryptocurrency businesses in recent years, the increased level of scrutiny being given to these institutions is one trend we can safely predict will continue to gain momentum.”