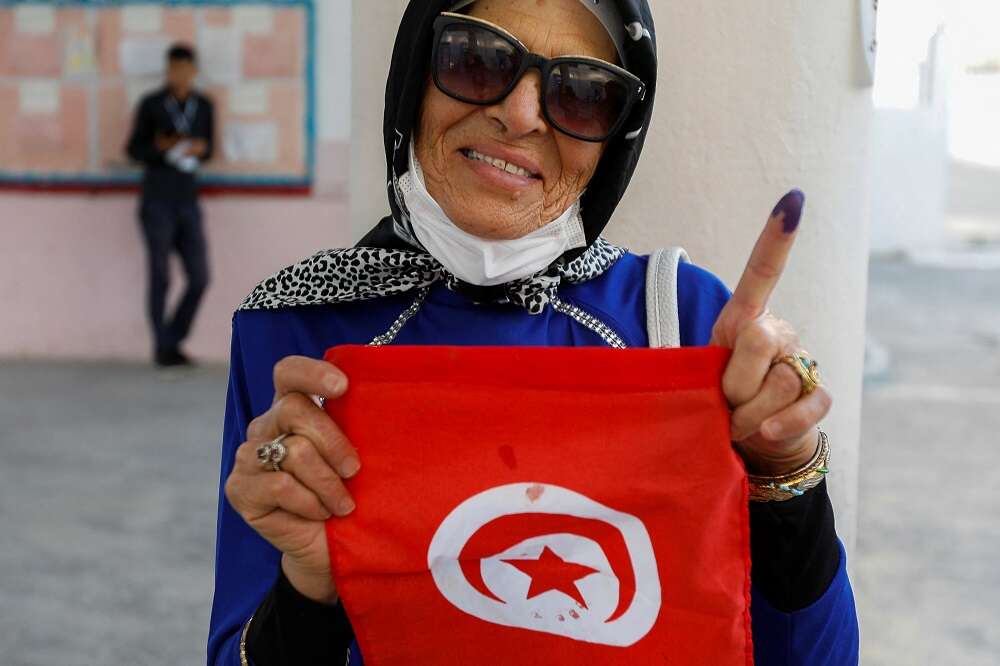 By Tarek Amara and Angus McDowall

TUNIS (Reuters) -Tunisians voted on Monday on a new constitution which critics of President Kais Saied fear will dismantle the democratic gains of the 2011 revolution by handing him nearly total power.

The divided opposition urged a boycott, calling Saied’s moves a coup that risks flinging Tunisia back into the autocratic era from before the revolution and putting the final nail into the coffin of the 2011 Arab Spring uprisings.

The electoral commission said 13.6% of voters had taken part by 1430 GMT, nine and a half hours into the 16-hour voting period. However, with very hot weather meaning a possible surge in evening voting, it was not clear what the figure meant for the eventual turnout.

The new constitution shifts power back to the presidency and away from parliament, which for years has been synonymous with political paralysis, and where an Islamist party, Ennahda, has been the biggest faction since the revolution.

Casting his vote, Saied hailed the referendum as the foundation of a new republic, a year to the day after he ousted an elected parliament, established emergency rule and began governing by decree.

Western democracies that looked to Tunisia as the only success story of the Arab Spring have yet to comment on the proposed new constitution, although they have urged Tunis over the past year to return to the democratic path.

“I’m frustrated by all of them. I’d rather enjoy this hot day than go and vote,” said Samia, a woman sitting with her husband and teenage son on the beach at La Marsa near Tunis.

Others voiced support for Saied.

Casting his vote on Rue Marseilles in downtown Tunis, Illyes Moujahed said the former law professor was the only hope.

“I’m here to save Tunisia from collapse. To save it from years of corruption and failure,” said Moujahed, first in line.

But the atmosphere was muted in the run-up to the referendum, with only small crowds attending rallies for and against the constitution.

Standing outside a cafe in the capital, Samir Slimane said he was not interested in voting. “I have no hope of change. Kais Saied will not change anything. He only seeks to have all the powers,” he said.

Many Tunisians welcomed Saied’s sudden seizure of power last summer as a corrective to years of political infighting and government failure by ruling factions. But he has done little to address deepening economic hardship and Tunisia is seeking an IMF rescue package.

“To restore Tunisia and establish discipline we need a strong man who uses a stick,” said Monzher Galaoui, a middle aged man at a cafe near the polling station in the capital’s poor Ettadamon district.

Anaemic support for his constitution could cause problems for Saied, who has not built broad political alliances, and encourage his foes to contest his rule, said Nadim Houry, executive director of the Arab Reform Initiative.

“A low turnout will mean he will hit turbulence, especially as Tunisia enters a summer of discontent over the economy.”

Critics of Saied already challenge the vote’s legitimacy because the constitution was prepared without involving Tunisian political or civil society groups, and because there is no minimum level of participation to pass it.

His critics have also disputed the integrity of the vote after he unilaterally changed the electoral commission board this year.

Of the three parliamentary elections and two presidential elections since the revolution, the lowest turnout, of 41%, was in 2019 for the chamber dissolved by Saied.

Economic decline since 2011 has left many Tunisians angry at the parties that have governed since the revolution and disillusioned with the political system they ran.

To address economic privations, the government hopes to secure a $4 billion loan from the IMF, but faces stiff union opposition to the required reforms, including cuts to fuel and food subsidies.